This World and The Sadvipra Diversion 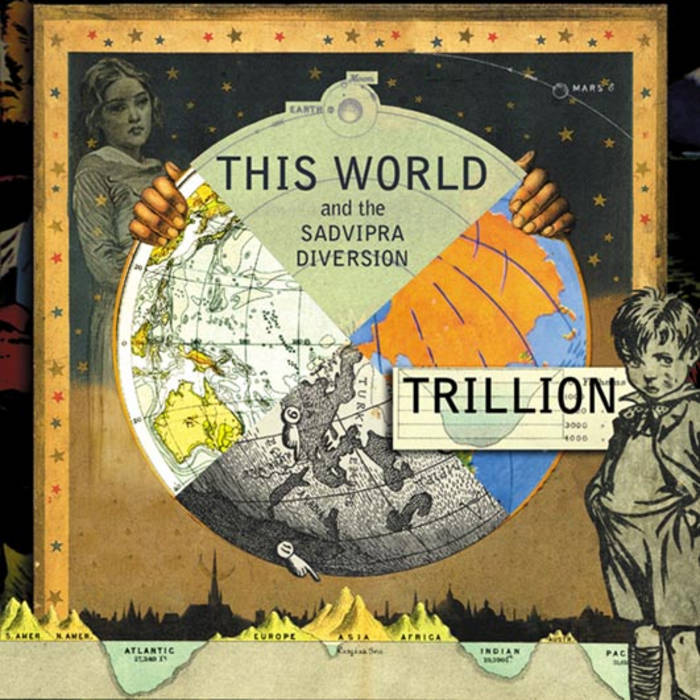 Before the recent consensus that Kiwi music has come of age, Jody Lloyd was already making hip-hop with a proud Kiwi accent. As part of Dark Tower, he delivered broadsides that could be both brutal and brilliantly funny, and always unmistakable in their New Zealandness. (His sampling of Fred Dagg's motto "Kick it in the guts, Trev" was just one memorable piece of appropriation.)
Since Dark Tower's demise, he has been going it alone under the banner of Trillion. Trillion's latest disc falls into two halves. This World is the first part and finds Lloyd combining the type of tough beats and vernacular rhymes that characterised Dark Tower's hip-hop with soaring pop melodies that might have come from some 60s songbook. Instrumentally, it's audacious, with trumpets, bouzoukis, violins and music-boxes weaving unpredictable paths through the guitars and drum programmes. There are gorgeous backing vocals and the usual apposite soundbites. Lyrically, it's Lloyd at his most personal and revealing, bewailing a love affair turned obsessive. At its best, these tracks are as hooky as "How Bizarre", as inventive as Beck circa Odelay, and more emotionally charged than either.
In the second half, the disc takes on a darker hue. Consisting of half-a-dozen songs, which Lloyd collectively calls The Sadvipra Diversion, it was begun after Lloyd hit a creative impasse while working on the initial set. Funnily, for a passionate advocate of locally flavoured lyrics, Lloyd's outlook in these latter songs tends to be global. In tracks like "Let Dogging Lies Sleep" and "Crawling Is Easy" he vents against war, consumerism and inter-national heads of state, to tough and at times chaotic beatscapes.
Though the gear change between the two halves is abrupt, Lloyd was ultimately wise to combine the projects. The folk-hop of the earlier tracks tempers the angry rants of the second half.
Nick Bolinger - The Listener


Dark Tower's man Jody Lloyd has a new album as Trillion. A double bill of 'This World' and the 'Sadvipra Diversion', the CD is the latest 'entertainment with a message' offering from this hip-rap poet/musician. You wouldn't know it from NZ Idol, but music has always had the power to stimulate change in cultural development, and Lloyd's music is all about entertaining and educating. The pop-appeal of 'This World' has the confidence of Lloyd's past successes, and with words, sounds and music his warmth and wit is eloquently offered once again. Sadvipra is one who stands up for societal justice, and Lloyd the soap-boxer lays his thoughts on thick and proud on the latter part of the album. The music of Trillion underpins words of criticism and hope, as a platform for political and Governmental insight.
Brent Cardy - Real Groove

Between its messages and the computer-styled hip hop vibe, this album displays an intellectual depth that New Zealand music often lacks.Split into two distinct parts, This World is mostly made up of beautiful, mellow fragments, while The Sadvipra Diversion (the angry half) is best described as political poetry - how corruption is destroying us and our world (which is interesting, but I like the first half better).Though I'm still not sure what to think of this, it's worth the listen since tracks like Sing Hallelujah show something so different from anything else on the music scene.
Mere Teinaki - Tearaway