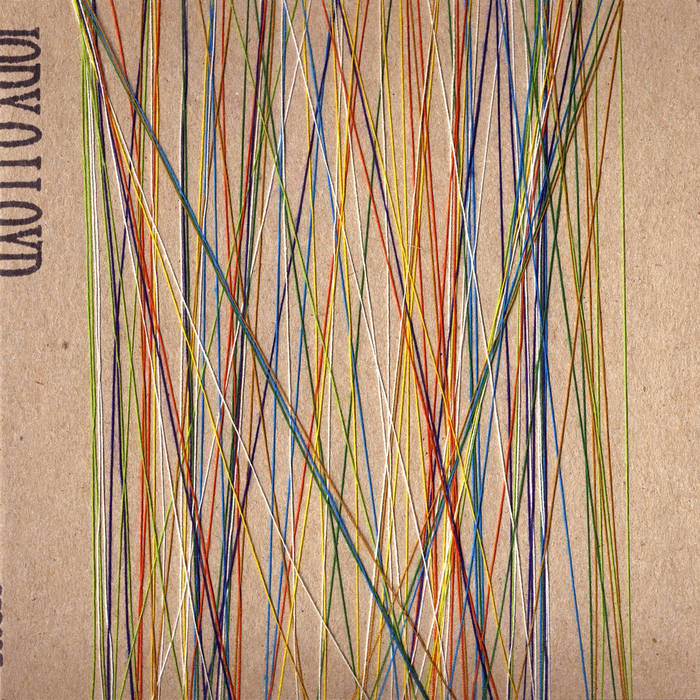 what is loops of love?

20 km of coloured thread, 6000 reprinted Polaroid photographs, 28 square metres of recycled card, 2 rubber stamps, 1 crochet hook an onion and a whole lot of love. Jody O Lloyd’s debut album, Loops of Love, is not only timeless it is time consuming. With approximately 10 minutes and 20 inconspicuous fingerprints devoted to the assemblage of each album, Jody Lloyd and his inventive companion, Devika Bilimoria, compile a neat work of art.

This tantalising work consolidates music and visual art within one novel pouch. It is tactile, audible, and visual. If you’re lucky you can smell the sweet scent of labour, and if you were that way inclined, it could also be consumed. In the mouth of each CD pouch rests an onion stamped disc and a tight stack of 12 coloured cards detailed with exquisite images and thoughtful text.

Eggs, oranges, loops, spheres, ‘o’s, circles and the like were in question and enjoyment when Jody and Devika met. Both having a keen interest in loops, musically and philosophically, they created an intimate language that then became the basis of the music and album art.

The loop themed images within the album are made with a unique Polaroid process, where Devika constructs her own negatives from found object (i.e. peas, foil, sections of vegetables) and liquids. As she speaks of her camera-less photography she states, “the notable thing about these images is that it is a photograph with a pea not of a pea…they seem to be a distant relative of the Photogram.” With hundreds of images to her name, Devika has been nurturing this ingenious analogue process for five years with numerous group and self-curated exhibitions in Australia, and is here to exhibit her art for the first time in NZ in conjunction with Jody’s music.

In Jody’s eclectic style Loops of Love is the yin to his Silent Invisible’s (Trillion) yang. Both albums are cleverly pieced together with seamless ingenuity. The funk, hip-hop, blues, electronic and soul in Loops of Love are elegantly woven together with Jody’s classic beat know how. It is a stunningly crafted album reminiscent of DJ Shadow, Beck, Buck 65 and RJD2, where your body and/or mind moves gracefully from the couch to the dance floor.

It’s hard to know what to expect from an album housed in an adorable homemade cardboard CD wallet and wrapped in coloured thread. Even more so when that wallet reveals its visual art collaboration; 12 printed cards containing beautiful photographic images by artist Devika Bilimoria, which correspond to each track’s illustrated lyrics on the flip.

Over the last 18 years, Jody O Lloyd has been involved in the local music industry in several different capacities – in Christchurch hiphop outfit Dark Tower and recently as rapper Trillion – and given the length of time, I was surprised that Loops of Love is Lloyd’s first solo project. It appears though that it was critically important to Lloyd to create an album for himself, without the interference and compromise that collaboration with other artists necessarily requires.

To write the lyrics, Lloyd ‘shut himself in a dusty room with pen and paper and channelled John Lennon for 22 days, eating cornflakes and Asian takeaways.’

The result is Loops of Love. Musically inspired by an interest in loops, the music with its simple hiphop beats and funk and disco samples easily draw comparisons with DJ Shadow and RJD2. But there is something slightly kitsch about his combination of samples. And when combined with Lloyd’s relaxed and kiwi-accented vocals, the sound is an interesting hybrid which reveals its influences while remaining clearly New Zealand. For example ‘Recipe for a Perfect Nap,’ with its spooning instructions has a sweet sincerity that makes it my fave.

Loops of Love is a beautifully presented, poignant and very enjoyable listen, best appreciated by people who live in Grey Lynn.